1. Preliminary interview: the selection process generally starts with this step where the totally unsuitable applicant is eliminated. Thus the organization is saved from the expenses of processing the applicant through the remaining steps of selection. The candidates who pass this step are only asked to fill the application form. 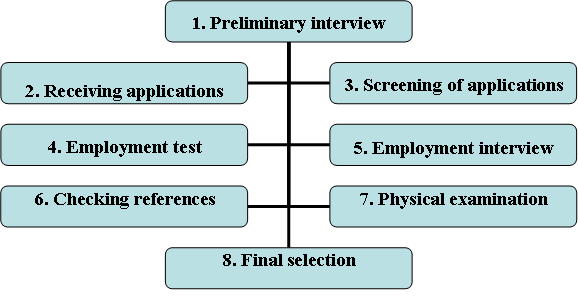 4. Employment test: after getting the interview letter and before going to the interview there is one more step and that is the employment tests. These tests are done to check the ability of the candidate. These tests vary from organization to organization and change as per the need of the particular job. these tests are intelligence tests, aptitude tests, trade tests, interest test, personality tests etc. these tests must be designed properly otherwise they will not good indicator of one knowledge.

There may be direct interview or indirect interview. The interview should be conducted in a room free from the noise and disturbance only than the candidates will be able to speak freely and frankly.

6. Checking references: before selecting the employ the prospective employee generally look out for the referees given by the candidate. To check about the candidate’s past record, reputation, police record etc.

8. Final selection: after all these steps the candidate is selected finally. He is appointed by issuing appointment letter. Initially he is appointed on probation basis after finding his work satisfactory he is appointed as permanent employee of the organization or otherwise he may be terminated.

Thus, all the above said steps of selection are important for the appointment of right kind of person for the right job.

Leave a Reply to One Minute Cancel reply