2 types or kinds or methods of incentive plans

1) Individual incentive plan: it may either be time based or production based. Under time based plan a standard time is fixed for doing the job. A worker is said to be efficient if he completes the job in time and he is given the reward for his efficiency.

i) The time based individual incentive plans are:

b) Rowan plan: it is the modification of the Halsey plan it also guarantees the minimum wages and does not penalize the slow workers. Standard time is fixed and the bonus is paid on the basis of time saved

c) Emerson plan: in this plan minimum wages are guaranteed to the workers efficiency is measured on the basis of the comparison of actual performance with the standard fixed. Under this method if the efficiency is 100% the bonus would be paid at 20% and above 100% bonus at 30% would be paid. Thus efficient workers will be rewarded at an increasing rate with the increase in saving time.

d) Bedeaux plan: under this minute is the time unit described as the standard minute. The standard time for each job is fixed after undertaking time and motion study expressed in terms of B. the standard time for a job is the number of B’s allowed to complete it. Generally the bonus paid to the worker is 75% of the wages for time saved. The rest 25% goes to the foreman. 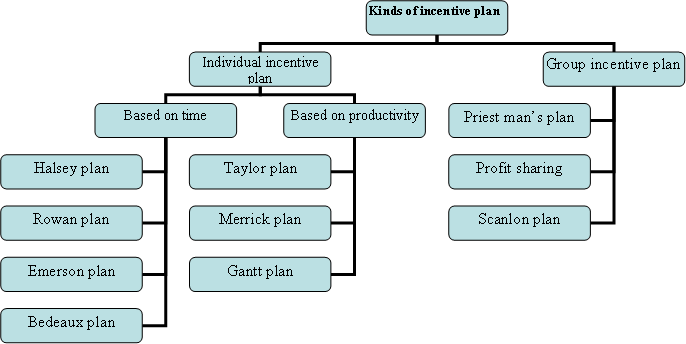 ii) The production based individual incentive plans are:

Under the production based incentive plan a standard output is fixed and the workers are paid on the basis of the production. They are given incentive if they produced more number of units than the standard fixed. it includes the

Standard production = 40 units in a day

b) Merrick’s multiple piece rate plan: under this plan there are three grade piece rate rather than two given by Taylor.

Workers who produce Less than 83% are paid basic piece rate

Thus this system is improvement over the Taylor’s plan. But this system also does not give guarantee minimum wages to the workers. All the workers producing between 1 to 82% of standard output are considered same and paid at the same piece rate.

c) Gantt’s bonus plan: under this method minimum wages are guaranteed. If the worker fails to complete the task within the standard time he receives only the wages for actual time spent at the specified rate. But if he completes the task within time he gets extra wages.

Bonus 25% of the standard time

2) Group incentive plan: under this method group bonus is given instead of individual bonus. The bonus is distributed among all the employees of the organization on the different basis which are as follows:

a) Priestman’s plan: under this method Bonus is increased in proportion to increase in output.

b) Profit sharing method:  under this method increased profit is shared among the workers and management as agreed between both the parties.

c) Scanlon plan: under this method bonus is paid in proportion to the production 1% bonus if 1% increases in production.

5 Replies to “Types of incentive plans”